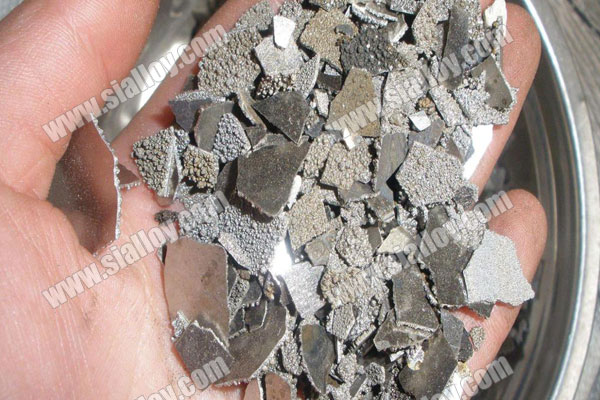 Electrolytic manganese metal is made of manganese carbonate ore powder (processed from rhodochrosite and pyrolusite). First, leach manganese from manganese carbonate ore powder with sulfuric acid to obtain manganese sulfate solution, then add manganese dioxide oxidation,ammonia water and iron removal, add a scavenger to remove heavy metals, then through fine filtration purify the impurities, and add the electrolytic additives to the filtrate, and then send to the electrolytic cell. In the electrolytic cell, elemental manganese is precipitated at the cathode, and the oxygen is precipitated at the anode. The cathode is periodically replaced, and the electrolysis products on the cathode are passivated, rinsed, dried, peeled,inspected and package to obtain electrolytic manganese flakes. It appear like iron, irregular flakes, firm and brittle, one side is bright, the other side is rough, the color appear silver white to brown, if processing into powder, it will appear silver gray.

China’s electrolytic manganese metal is mainly based on 99.7% (most manufacturers have actually reached more than 99.8% ), and only few manufacturers produce 99.9% because of the 99.9% have small market demand. Electrolytic manganese metal flakes is mainly used in the steel industry due to its high purity, low impurities and low carbon content, manganese in the steel is mainly to improve the strength, hardness, elastic limit, wear resistance and corrosion resistance of steel. Mainly used as special steel and non-ferrous alloy elements, such as low-carbon stainless steel as deoxidizer, aluminum-manganese alloy and copper-manganese alloy etc.