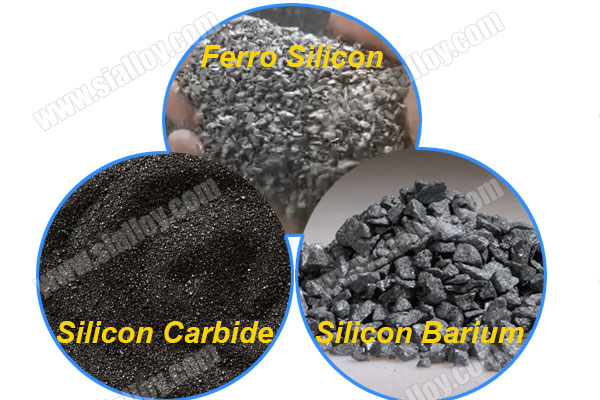 According to different casting requirements, the commonly used inoculant for cast iron is as follows:

1. 75/72% Ferrosilicon in the particle size 3-8mm/1-3mm/0.2-0.8mm is the most commonly used inoculant. The content of aluminum and calcium plays an important role in the inoculation effect. It is generally believed that molten iron, aluminum, and calcium will react with oxygen and nitrogen to form compounds with high melting points and become graphite The core of crystallization. Moreover, after adding the inoculant, local silicon-rich micro-regions can be formed in the molten iron, which is conducive to graphite precipitation. When purchasing ferrosilicon for incubation, the content of aluminum and calcium cannot be ignored.

3. Using 20-30% barium-containing silicon-barium alloy as an inoculant can significantly reduce the white mouth tendency of cast iron and increase the time for maintaining the inoculation effect to about 30 minutes, especially suitable for use For large castings, the amount of alloy added during processing is about 0.1%.

4. Silicon carbide is a substance with the reputation of "rich core". As an additive inoculant for cast iron, it reduces the tendency of castings to white mouth, enhances the graphite nucleation ability and increases the graphite nucleation center, and obtains a moderate number of eutectic clusters. The shape and distribution of graphite that meets the requirements. After the synthetic cast iron smelting process is applied, when the proportion of scrap in the furnace charge is too high and the number of molten iron cores is too small, the nucleation effect of silicon carbide can play a key role. The silicon carbide inoculant for cast iron is generally with the content of SiC 88-90%, and the particle size is relatively small 0.1-0.5mm, which can be used for smelting small tonnage ladle.

If you do not know how to choose or use inoculant can contact Anyang Huatuo Metallurgy who has in such materials for cast iron for more than 20 years.